Very little has appeared in the literature about it or the Sauceda range as a whole. One study of the adjacent Sauceda Valley conducted in 2002 and cited here does describe the origin of the range. 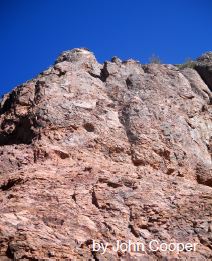 Photo credit
"Bedrock lithologies in the Sauceda Mountains ... consist primarily of silicic volcanic rocks (rhyolite and rhyodacite), with lesser amounts of mafic volcanic rocks (basalt and basaltic andesite) (Gray and others, 1985). Based on radiometric age estimates obtained for these rocks, they were erupted in the Miocene around 20 Million years ago." (Demsey et al, 2002)

Geologically this is young rock, but the climate and consequent weathering has removed much of the softer and more fragmented volcanic material and deposited it in the short alluvial fans and nearby flat valleys. It appears Tom Thumb is a resistant remainder of a much higher mountain. Perhaps it is a volcanic dike removed of its surrounding cover by erosion. The very shapes of the jutting structure suggest this possibility.

"The topographic fronts of the mountains are very embayed and sinuous, and outlying bedrock hills (inselbergs) are common. The very steep mountain slopes with minimal cover of colluvium attest to the predominance of erosional processes (Bryan, 1925). Erosion is facilitated by uncommon but intense rainfall and runoff, steep slopes, and sparse vegetative cover. It is likely that significantly more hillslope colluvium covered bedrock slopes in the mountains during glacial pluvial intervals of the Quaternary, especially in mountains composed of granitic or metamorphic rocks (Bull, 1991)." (Demsey et al, 2002) 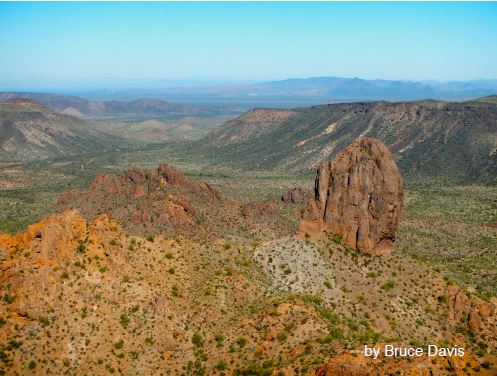 The surface rocks in this area contain numerous included obsidian nodules, and may be rich in mineralized tungsten as noted in the other scant literature about the mountain range in general.

In summation this is a worthy destination for a days four wheel excursion and a few hours of moderate hiking. The Ryans Wash approach leaves the traveler a bit over a mile from the structure. Great care in the approach during hot or wet weather must be exercised and in no event should a single vehicle attempt this approach as retrieval may be needed in the soft gravel of the wash.